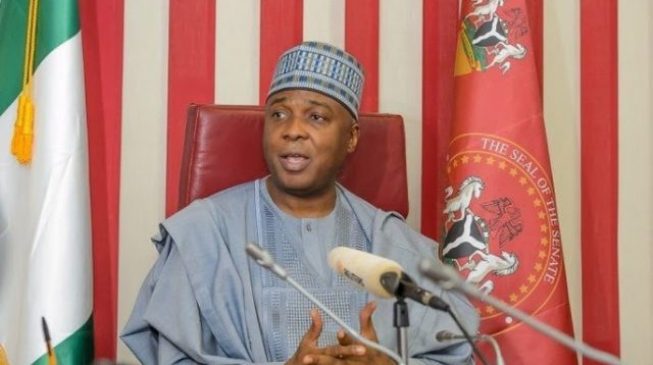 The Federal High Court in Abuja on Tuesday restrained the Economic and Financial Crimes Commission and other agencies involved in the probe of  Senate President Bukola Saraki over corruption allegations.

Saraki on Friday filed two separate fundamental rights enforcement suits before the court to challenge the decision of the EFCC to seize his houses.

Ruling on an ex parte application filed along with the substantive suit by Saraki, Justice Taiwo Taiwo, on Tuesday ordered the anti-corruption body and the other five respondents to the suit to stay action on the probe pending the hearing and determination of the motion on notice filed by the applicant.

The judge made the order after hearing Saraki’s lawyer Sunday Onubi, who moved the application.

The six respondents to the suit affected by the restraining order are the Attorney General of the Federation, Mr Abubakar Malami (SAN),  Department of State Services,  Inspector-General of Police, Muhammed Adamu,  EFCC,  Independent Corrupt Practices and other related offences Commission and  Code of Conduct Tribunal.

In a ruling delivered by the judge on returning to the courtroom after taking about 45 minutes to prepare it in his chambers, the court likened the restraining order issued on Tuesday to an order directing the parties to the suit to maintain the status quo in respect of the probe.

Ordering them to suspend the probe, Justice Taiwo said he granted Saraki’s prayers to avert a situation where the court would be faced with a situation of fait accompli.

He added that granting the order was in line with a settled principled of law that once a suit was filed, all parties to it must refrain from taking any action capable of rendering the suit nugatory.

According to him, the order amounts to an order directing the parties to maintain the status quo.

He added that the law allows such an application to be granted in a situation where the applicant would likely face “hardship” between the time of serving processes in the suit on the respondents and hearing and determination of the suit.

He ruled, “There is no doubt that the Fundamental Rights Enforcement Procedure Rules 2009 is a special proceeding with its stated rules and procedure.

“There is no doubt that in making the interim reliefs or orders,   the court is guided even in its exercise of its discretion judicially and judiciously applied by the law and statues.

“Here comes in the rules and of course Constitution of the Federal Republic of Nigeria.”

He added, “I am of the view, after due consideration of the aforesaid averment, that this court ought to make the order being sought by the applicant pending the hearing and determination of the originating motion on notice.

“To do otherwise and not to restrain the respondents by asking them not to stay action will result in the court being faced with a fait accompli.”

The judge made the same set of orders in the two separate suits marked FHC/ABJ/CS/507/2019 and FHC/ABJ/CS/508/2019, filed by Saraki,  which were separately argued and ruled upon on Tuesday.

Justice Taiwo then directed the applicant to serve the court processes on the six respondents who he also directed to file their response within five days of being served.

He adjourned further hearing till May 23, 2019  when the respondents will have  an  opportunity to challenge the ex parte order by arguing their objection to Saraki’s motion on notice.

The Super Eagles of Nigeria will face the Carthage Eagles of Tunisia in the ongoing African Cup of Nations (AFCON) round of 16 fixtures.

The mouth-watering clash was announced on Thursday night following Tunisia’s 1-0 loss to the Gambia — which consigned the North Africans to qualify as one of four best third-placed teams in the group stage.

Nigeria had finished top of Group D after winning all three of its group stage matches.

The tie against Tunisia is expected to be a repeat of the bronze medal match at AFCON 2019 in Egypt where Odion Ighalo’s goal confirmed the Super Eagles’ third place.

It is also a reunion for Austin Eguavoen, Super Eagles interim coach, who faced Tunisia at the quarter-finals stage at AFCON 2006 in Egypt. Nigeria won 6-5 on penalties after a 1-1 draw to advance into the semi-finals.

In other pairings, Cameroon, AFCON hosts, will face Comoros, tournament debutants, while Burkina Faso will play the Gambia, another debutant nation.

Two giants will also clash as Ivory Coast will slug it out with the Pharaohs of Egypt in a repeat of the 2006 AFCON final. Egypt, the then hosts, had won the clash 4-2 on penalties after a 0-0 draw to deny the star-studded Ivorian team.

The round of 16 ties will begin on Sunday, January 23, with Nigeria’s tie against Tunisia one of two matches for the day.

AFCON ROUND OF 16 FIXTURES

IPOB Faults Army, Says We Have No Camps in Ihiala, Criminals Not IPOB Members

The Indigenous People of Biafra has said that it does not have any camp in Lilu, Ihiala in Anambra State. The group claimed that they were not militants or criminals, hence do not operate in hidden camps.

The army, had, on Tuesday, through its spokesman, said it dislodged the camps of IPOB and Eastern Security Networks in Lilu, Ihiala.

However, in a statement on Wednesday, the IPOB Media and Publicity Secretary, Emma Powerful, said that the security agencies only unleashed cruelty on the people living in those communities claiming they were members of IPOB and ESN.

Powerful stated that if criminals take refuge in any community in Biafra land, that doesn’t make them IPOB members or ESN operatives.

He said, “We have also not said there are no more criminal gangs in Biafra land just like every other country even in the advanced western nations. But we won’t accept the tagging of every criminal element found in Biafra as an IPOB member or ESN operative.

“Recall that some of these criminals were already mentioned by IPOB leadership sometime during a broadcast. These hoodlums were a creation of wicked politicians in their desperation to discredit IPOB and ESN.”

The group claimed that the Nigeria Army, Police and DSS keeps dishing out falsehoods against IPOB and ESN by tagging those criminals they arrested as IPOB and ESN members.

It said the so-called camp where these said criminals were arrested does not belong to ESN, “They should stop lying against us,” Powerful said.

The statement further reads, “In Orsumoghu, Nnewi South, Lilu Orsumenyi of Ihiala LGA of Anambra State these criminals whose names are Emmanuel aka (Obereagu), Innocent Obiekee from Isingwu Orsumoghu, Izuchukwu from Amaduru Orsumoghu, Ofordie aka Baby, are the ones impersonating ESN/IPOB members using ESN name to commit crimes against the people of these communities they are not ESN members, the communities involved should use their vigilante group and stop them, ESN will help them too.

“They and their gang are collecting illegal levies at the Eke-Ututu market in the name of ESN when they are neither ESN operatives nor IPOB family members.

“The people are collecting proceeds from innocent communities. Collecting N5,000 from Orlu people in the name of ESN. These names mentioned or listed in this press statement have been declared Persona Non-Grata in Biafraland and they remain so. People must stop giving them money they are not ESN operatives and not IPOB volunteers.

“They have been kidnapping people, snatching cars and raping our women in our territory. IPOB volunteers and ESN operatives have also been making efforts to apprehend these agents of sorrow. We cannot watch these beasts created and sponsored by Hope Uzodinma, his masters in Miyeti Allah and their co-travellers destroy Biafra land.

The statement continues, “Again, ESN does not write letters to people or make calls to people requesting funds, funds for what we ask? IPOB and ESN have no dealings with such evil activities of these criminals who are now on the ESN watchlist. Be warned and stop giving them money in the name of ESN or IPOB volunteers.” 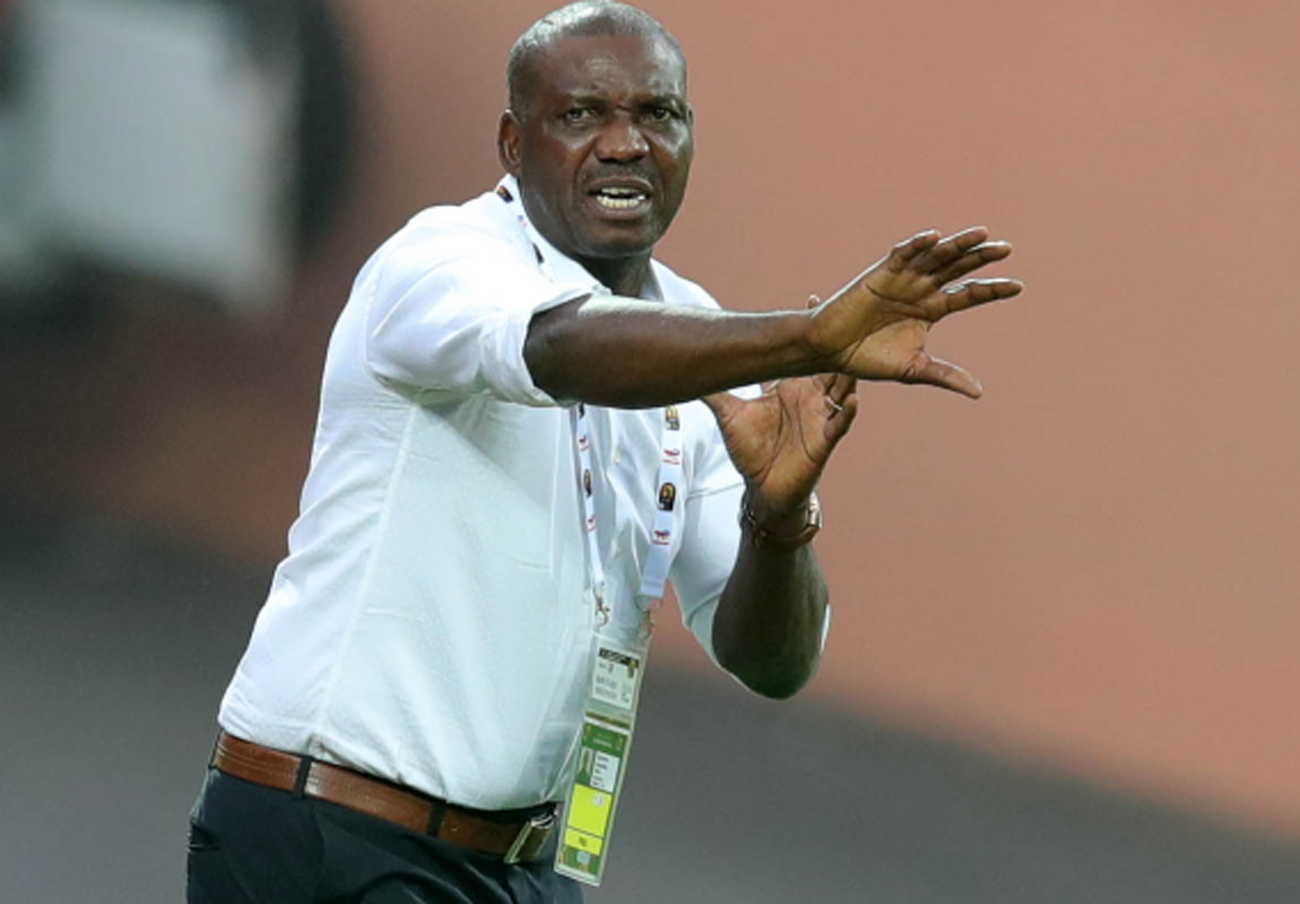 Interim coach Austin Eguavoen will be entitled to only win bonuses as the Super Eagles gaffer at the ongoing Africa Cup of Nations tournament in Cameroon, PUNCH Sports Extra reports.

Eguavoen was appointed on a short-term deal after the Nigeria Football Federation sacked Gernot Rohr in December.

Rohr was Nigeria’s longest-serving manager after taking charge in August 2016, but had his contract terminated after leading the Eagles to the 2022 World Cup qualifying play-offs and sealing a spot at the Nations Cup in Cameroon.

The Franco-German also led Nigeria to the 2018 World Cup and guided the team to third-place at the 2019 Africa Cup of Nations in Egypt.

“Eguavoen is on the payroll of the NFF and he won’t be entitled to salary for the role he is playing as an interim coach of the team,” President of the NFF Amaju Pinnick stated recently on Arise TV.

“He will be entitled to the winning bonuses as the team progress at the tournament.”