Emmanuel Macron has announced he wants to see Notre Dame cathedral rebuilt “more beautiful than before” within five years, but there are warnings that the repairs could take decades and will involve substantial challenges.

The main problems include the sourcing of materials and painstaking work to preserve elements of the church that have survived the fire but might have been badly damaged by it, experts have warned.

“The damage will be significant,” Fischer said.

Donations have poured in from around the world for the restoration efforts, with more than €800m (£692m) pledged as French tycoons and global corporations announced they would donate.

“The fire at Notre Dame reminds us that our history never stops and we will always have challenges to overcome,” Macron said on Tuesday night. “We will rebuild Notre Dame, more beautiful than before – and I want it done in the next five years. We can do it. After the time of testing comes a time of reflection and then of action.”

French authorities revealed on Tuesday that the cathedral was within “15 to 30 minutes” of complete destruction as firefighters battled to stop flames reaching its gothic bell towers.

A greater disaster was averted by members of the Paris fire brigade, who risked their lives to remain inside the burning monument to create a wall of water between the raging fire and two towers on the west facade.

The revelation of how close France came to losing its most famous cathedral emerged as police investigators questioned workers involved in the restoration of the monument to try to establish the cause of the devastating blaze.

Despite fears at the height of the inferno that the whole cathedral would be lost, the structure appears mainly intact.

There are fears that the stones of the ceiling and beloved stained glass windows, which survived the blaze, may still have been badly damaged by it. If the stones of the vaulted ceiling have been weakened and cracked by the heat, the whole vault may need to be torn down and re-erected. 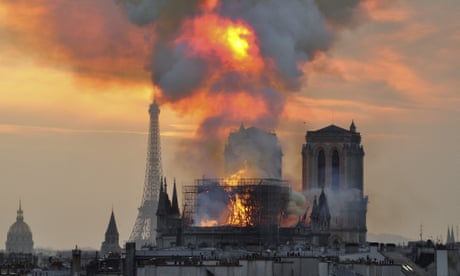 Notre Dame was ‘15 to 30 minutes’ away from complete destruction

The cathedral’s exquisite stained-glass rose windows are probably suffering “thermal shock” from intense heat followed by cold water, said Jenny Alexander, an expert on medieval art and architecture at the University of Warwick. That means the glass, set in lead, could have sagged or been weakened and will need minute examination.

The first challenge for repairers will be to secure the building without disturbing the debris.

“Some of that material may be reusable, and that’s a painstaking exercise. It’s like an archaeological excavation,” said Duncan Wilson, chief executive of the conservation organisation Historic England.

Once the building has been stabilised and the damage assessed, restoration work can begin. It is likely to be an international effort.

“Structural engineers, stained-glass experts, stone experts are all going to be packing their bags and heading for Paris in the next few weeks,” Alexander said.

Financial and political considerations, as well as aesthetic ones, are likely to play a part in the decision about whether to preserve the cathedral as it was before the fire, or adapt it.

Getting materials may also be a challenge. The cathedral roof was made from oak beams cut from centuries-old trees, which were difficult to source even in the 13th century. Nickson said there is probably no country in Europe with big enough trees today.

Then there is the question of conforming to modern-day health and safety standards.

The roof of Strasbourg’s Notre Dame was set ablaze during the 1870 Franco-Prussian War. Nowadays the roof is split into three fire-resistant sections to make sure one blaze can’t destroy it all, with smoke detectors installed are at regular intervals.

“Cathedrals are stone phoenixes reminders that out of adversity we may be reborn,” said Emma Wells, a buildings archaeologist at the University of York.

“The silver lining, if we can call it that, is this allows for historians and archaeologists to come in and uncover more of its history than we ever knew before. It is a palimpsest of layers of history, and we can come in and understand the craft of our medieval forebears.”

… we have a small favour to ask. More people are reading and supporting our independent, investigative reporting than ever before. And unlike many news organisations, we have chosen an approach that allows us to keep our journalism accessible to all, regardless of where they live or what they can afford.

The Guardian is editorially independent, meaning we set our own agenda. Our journalism is free from commercial bias and not influenced by billionaire owners, politicians or shareholders. No one edits our editor. No one steers our opinion. This is important as it enables us to give a voice to those less heard, challenge the powerful and hold them to account. It’s what makes us different to so many others in the media, at a time when factual, honest reporting is critical.

Every contribution we receive from readers like you, big or small, goes directly into funding our journalism. This support enables us to keep working as we do – but we must maintain and build on it for every year to come.

Senate Rejects Bill to Phase Out Petrol Vehicles by 2035

Attorney-General of the Federation (AGF), Abubakar Malami, has said that special terrorism prosecution courts will soon be resuscitated in Nigeria.

In a statement on Thursday, Special Assistant on Media and Public Relations to the AGF, Umar Gwandu, said the decision is part of efforts to address insecurity.

“The federal government is committed to ending insecurity in the country. The courts are to bring to book all those found guilty in connection with terrorism, so as to serve as a deterrent to others,” the statement read.

“In addition to the prosecution of 400 suspected Boko Haram financiers, the measures taken by the government will counter the twin trouble of insurgency and insecurity in the country.”

The practice direction was intended to fast-track criminal trials relating to offences of terrorism, kidnapping, trafficking in persons, rape, corruption, and money laundering cases, and ensure that delays in criminal trials are largely eliminated.

Under this practice, the court shall ensure that criminal cases are fully ready for trial before hearing dates are agreed, in order to minimise undue adjournments and delays.

Parties involved in the trials are also expected to focus only on important matters relating to their cases.

In a notice published on Thursday, Azuka Ogugua, spokesperson of the anti-graft commission, said Kumo is declared wanted alongside Tarry Rufus and Bola Ogunsola over alleged misappropriation and dispersion of national housing funds.

Kumo, a former managing director of the Federal Mortgage Bank of Nigeria, married Fatima, the president’s daughter, in 2016 at Daura, Katsina state.

“The persons whose pictures appear above, Mr. Tarry Rufus, Mr. Gimba Yau Kumo and Mr. Bola Ogunsola, are hereby declared WANTED by the Independent Corrupt Practices and Other Related Offences Commission (ICPC) in connection with issues bordering on misappropriation of National Housing Funds and diversion of the sum of Sixty Five Million dollars ($65,000,000),” the ICPC said.

“Anyone who has useful information on their whereabouts should report to ICPC Headquarters Abuja, any of the ICPC State Offices or the nearest police station.”

In April, the senate committee on public accounts summoned Kumo to explain the alleged irregular award of N3 billion contract when he was still at the bank.

On Monday, Hakeem Odumosu, Lagos commissioner of police, said the command is probing threats of attacks by the proscribed Indigenous People of Biafra (IPOB) and Oodua Republic agitators.

The groups have, however, denied the allegations.

Speaking at a meeting with Sanwo-Olu at the Lagos government house on Thursday, George Obiozor, Ohanaeze president-general, said the “rumour” is intended to distract the governor from delivering good governance to the people.

Obiozor said Igbo people are not known for acts of violence.

“Today, the leadership of Ohanaeze Ndigbo worldwide, in the company of Igbo elders and leaders in Lagos, are here to pay you (Sanwo-Olu) a solidarity visit and to further reassure you that Ndigbo are not violent in nature, neither are we known for acts of violence anywhere we live,” Gboyega Akosile, chief press secretary to the governor, quoted Obiozor as saying.

“We think that this rumour is intended to distract the Lagos State Government from its efforts to provide good governance for all and cause disaffection between Ndigbo who live in Lagos and their host community, which is the second home of several Ndigbo.

“The quick denial of this rumour by members of IPOB and Yoruba groups in Lagos and across the south-west was a source of relief.

“The Igbo nation is renowned for being agents of development, not destruction. Ndigbo are builders and their contributions to the development of Lagos State are evident and exemplary.”