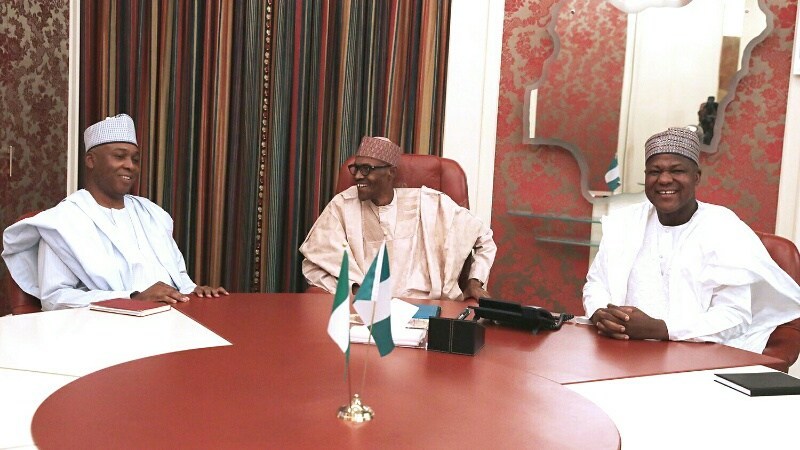 The National Assembly on Tuesday passed the 2019 Appropriation Bill, raising the size by about N17bn from the N8.83tn proposed by the Executive to N8.916tn, with N23.7bn earmarked for lawmakers’ severance gratuities and allowances.

Although a sinking fund of N120bn was proposed for the retirement of maturing bonds to local contractors, the lawmakers approved N110bn.

While the sum of N2.031tn (including capital supplementation but excluding the capital component of statutory transfers) was proposed, the lawmakers approved N2,094,950,709,632 “for contribution to the Development Fund for Capital Expenditure for the year ending on December 31, 2019.”

The Senate and House of Representatives Committees on Appropriations, in their reports considered concurrently by the chambers, had recommended a total budget estimate of N8,906,964,099,373.

Both the Senate and the House of Representatives, however, resolved to add N10bn to the Service Wide Vote for the rehabilitation of Zamfara State over the destructions caused by bandits in the North-West state.

A close observation of the estimates passed by the House showed that under Statutory Transfers, the National Assembly raised its budget from the proposed N125bn to N128bn. The legislature got N139.5bn appropriation in 2018.

Under Recurrent (Non-Debt) Expenditure, N1bn was voted for severance benefits to retired heads of government agencies and parastatals, and N2.3bn for the entitlements of former Presidents/Heads of State, Vice-Presidents and Chiefs of General Staff.

The sum of N22,682,832,166 was appropriated for the payment of outstanding terminal benefits of Nigerian Airways’ ex-workers.

Operation Lafiya Dole and other special operations by the Armed Forces got N75bn.

Under the executive sub-column, the Presidency will get N430.8bn for recurrent and N18bn for capital expenditures.

Earlier during consideration of the bill at the House, a member from Kano State, Mr Damburam Nuhu, noted the large amount allocated to the Office of the National Security Adviser as against what came to sections of the National Assembly. He said it was important for Nigerians to note that one office got as much as N86bn.

Agric-focused lender, Unity Bank Plc has partnered Nigerian rice farmers under the aegis of Rice Farmers Association of Nigeria, RIFAN to unveil a mega rice pyramid on the occasion of the National Rice Festival held in the Federal Capital Territory, Abuja on Tuesday.

The event, which coincided with the flag-off of the dry season farming, was used to showcase the gains produced by rice farmers in driving self-sufficiency in rice production through the Central Bank of Nigeria’s Anchor Borrowers Programme, ABP.

Speaking to newsmen at the event, the Managing Director/Chief Executive Officer of Unity Bank, Mrs. Tomi Somefun, while going down memory lane on the support of the rice farmers by the Bank since the inception of the Anchor Borrowers Programme, ABP commended the rice farmers for their unwavering belief and collaboration in the implementation of the intervention programme, adding that as the PFI (Preferred Financial Institution) for the ABP transactions, the Bank will continue to support the farmers and ensure that more smallholder farmers get the requisite financial support to boost rice production.

She said: “Our strategic partnership with RIFAN started in 2018 when we financed about 273,000 smallholder farmers. This was the largest single-ticket transaction in that year. This financing cut across 33 states of the Federation including the FCT.

“In 2019, the Bank increased the tally by financing another 146,810 smallholder farmers for the wet and dry season farming. This funding cut across 35 States of the Federation including the Federal Capital Territory (FCT).

“Additional funding was granted to finance additional 221,450 smallholder farmers of the Association across the 32 states of the Federation including FCT for the wet season and additional 300,000 hectares was financed in sixteen states for the 2020 dry season cropping season.

“As of March 2021, the Bank has financed no fewer than 190,000 smallholder rice farmers across 35 states including the FCT, Abuja.”

Speaking further, she said: “The rice pyramids we see here today is an example of the resilience of the farmers and should be replicated in all states with a focus on the crop they have a competitive advantage.

“As we gear the programme towards deepening its penetration to reach more farmers, we encourage all beneficiaries of the Intervention Programme to always utilize the inputs judiciously in order to key into Federal Government’s goal of attaining food sufficiency, diversification of the economy from oil, job creation for the teeming youth and poverty reduction”.

“We remain optimistic that RIFAN under the able leadership of the National President, Aminu Goronyo, will continue to engage its members to drive higher performance under the ABP.”

Through the strategic initiative of the ABP, Nigeria has made incredible gains in rice production over the past six years raising production to significant levels.

Similarly, the average capacity utilisation per annum of domestic integrated rice mills has jumped to 90 per cent, from the 30 per cent that was the case in the era preceding the advent of the ABP.

Statistics show that there has been a significant reduction in the country’s rice import bill, from a monstrous $1.05 billion prior to November 2015, to the current figure of $18.50 million, annually. The programme has also created an estimated 12.3 million direct and indirect jobs across the different value chains and food belts of the country.

Nigeria’s leading digital bank, Wema Bank Plc, has reassured its stakeholders that it continues to operate with best-in-class governance processes.

The bank also faulted the premise on which a non-governmental organisation, Transparency Nigeria Group, asked the Central Bank of Nigeria (CBN) to remove its Managing Director/CEO, describing the call as baseless.

The bank reassured its customers and stakeholders that it has and would continue to operate with the highest level of corporate governance, following all rules, policies, and procedures.

“We have no links to any political party and neither are we agents, allies or proxies of any politicians in the country. We are a financial institution solely committed to financial intermediation to enable and fast track the socio-economic development of the country,” the bank said.

The statement further explains that Wema Bank’s observance and strict adherence to due diligence and extant rules and regulations is why it is the oldest surviving indigenous bank in Nigeria.

The virtual event themed “A rearview look at 2021, lessons learnt-Outlook 2022” is scheduled by 1 pm on Thursday, 13th January 2022 via Zoom meeting. Click on the link  https://firstbanknigeria.zoom.us/webinar/register/WN_zrF8VViyTp6wnzED_3IpWw    to register and participate in the event. Registration is Free!!!

The webinar aims to set the tone for the year by providing an opportunity for participants to learn directly from economic experts to stay informed and knowledgeably empowered to make the right decisions in their socio-economic activities in 2022 which will be impacted by the micro and macro-economic activities of the country.

With Nigeria’s economy projected to grow by 2.7% in 2022 as predicted by The International Monetary Fund (IMF) based on an expected recovery in crude oil prices and production, Nigeria will see economic activities normalizing. Key economic activities to watch out for in 2022 include the Global Market trends, removal of subsidies, and floatation of the Naira. However, recoveries in the oil sector and maximization of the e-Naira could help keep the parallel market in check.

Since the outbreak of Covid-19 over two years ago, the global economy has witnessed viral economic shocks that adversely affected socio-economic activities. These have left many individuals and businesses struggling to stay afloat amid the economic downturn. As a leading financial inclusion services provider in the country, FirstBank has remained committed to providing products, services and initiatives that have been crucial in mitigating the adverse effects of Covid-19 on individuals and households.

Speaking on the event, the Group Head, Marketing & Corporate Communications of FirstBank, Ms. Folake Ani-Mumuney said ‘being woven into fabric of the society for over 127 years means that we provide value, support and innovation-driven solutions for our stakeholders regardless of the challenges of the pandemic. Our commitment to nation-building is anchored partly on our thought leadership role designed to relentlessly drive growth and scale for all through engagements that showcase versatile subject matter experts endowed with expertise, knowledge and valuable insights. The webinar provides a platform for cross fertilization of ideas and opportunities to learn and grow.  Nigeria is a country rich in human and natural resources and these have helped in the reforms and resilience reflected in the economy in 2021’.

The COVID 19 pandemic brought disruption and challenges and largely Nigeria adopted measures to contain it. The pandemic also provided opportunities for rebuilding and facilitating economic transformation to close the gap with the rest of the world. These include innovations in information technologies (IT) which have been critical to ensuring business continuity and productivity among firms that have re-designed their work processes as well as telecommunications and payment systems in the e-commerce sub-sector.

Whilst many of the current government policies are aimed at absorbing the shocks induced by the pandemic, it is important to note that an economy that seeks to recover and build resilience should be one that focuses on innovation and creativity in driving its goal.

The event is for everyone as discussants will have the economic outlook for 2022 dissected so participants are knowledgeably equipped to make the right decisions thereby better planning their business and financial activities.